I promised to write more and another update soon. Here it is. This is more or less unedited text from my typing on my little iPhone after the watches, when I was mostly very tired, so please excuse the style and typos.

Unfortunately we had a shitty start and we are last by a few miles (1 or 2) around the mark in front of the Buddha statue.
We expect a hard leg, with a lot of beating up wind, but the first day went otherwise well. 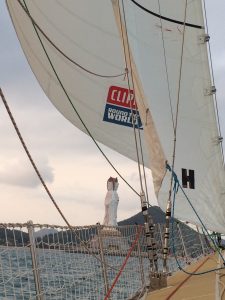 Morning – beautiful sunrise, but hardly any wind. Sea is very calm. We have 3-4 boats behind us and all in all we can see 7 boats around.
Over night we had to look out for fisher boats, but it wasn’t too crazy.
This morning some dragon flies visited the boat. 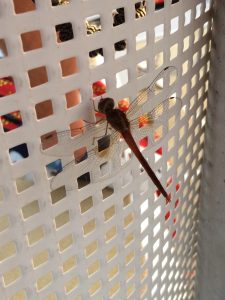 At lunch time we are still bobbling around. As the boats around us go faster, decision was made to change from the windseeker to Code 1. Let’s see if we can pick up speed with it.

We had to avoid and go around a large fishing net – probably more than 10 miles long. For that, we had to go off course and drop our Spinnaker. Other boats were further North and likely went around the other end of the net, potentially still with their Spinnakers up. Hence, it could be that we lost some ground. However, PSP, one of the leading boats, did get tangled up in the net and we don’t know how much time it did cost them to get free again.
We also had a little exhausted visitor on board: a sparrow came and searched for a landing spot on board. After a few more or less successful attempts he landed on Greg A.’s head, to pose for a photo shoot. After that it went on and stayed in the Hotel Staysail until we had to hoist the Yankee… good luck little friend! 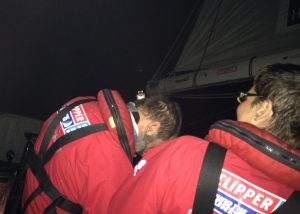 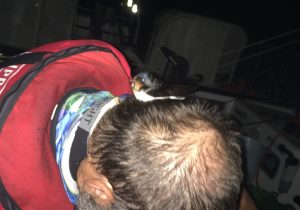 For lunch we had very tasty fried rice.

Yesterday I was mother (now called Bistro Service) together with Will (Guillermo) and Tom. We are slowly running out of vegetables and meat, so it will get much harder from now on to make some nice dishes (or any dishes for that matter).
The sea has been rough now for 4 days and slowly my body seems to accustom to it and I feel less seasick.
Just after the start of the Ocean Sprint 2 days ago, I noticed that we were trailing something behind us in the water and we had to ‘heave to’ [putting the boat in a kind of drift, which calms it down to enable work on the boat in heavy weather or just to get some relief from smashing into the waves – so rarely done during a race as you don’t make any real progress]. It was a small fisher net, which we only fully got untangled yesterday.
Overall we are currently in 9th position and I have no clue what we are generally doing wrong to always be that far back. In a direct competition – like the inshore races – we are often pretty good and competitive.
As we are getting further North, it is getting significantly colder and I have to get my warm clothes out later today, when I go back on watch this afternoon.
Just before watch change our port running back stay block broke and we had to ‘heave to’ again to repair it. As a spare part we used the block from our vang and replaced it there with a low friction ring. It seems only a question of time until the next part of material gives in.
Later Unicef passed behind us on the other tack. They used their storm gib as staysail, as their staysail broke.
We had to avoid a tanker later, which again cost us some miles.
We just try to get into the northern current quickly, which would help us on our way to Qingdao. Just hoping that also the wind shifts a bit so we don’t have it on our nose anymore then. Wind against current would not be very comfortable!

This day just finished. It was a long day. It started as a day with Bistro Service. Meaning ‘after‘ my 3 to 7am watch, I started making breakfast at 5:30am. This was followed by making two loafs if bread and then, with my Bistro Partner Carsten, a risotto for lunch. For dinner Carsten had decided to make a full 3 course meal. With an onion soup as starter, pasta with beef and tomato as main, finished with a dessert – for which I decided to make baked apples filled with honey.
The dessert didn’t go totally as planned and had to be delayed. Unfortunately that coincided with our boat getting into the middle of large set of fishing nets – and by large I mean a few square miles. After Carsten and I were done with our days work, ready to go to bed, I was summoned into the Nav station to ‘quickly & briefly’ help out. I spend the next 3h there helping to navigate our good boat through the rows of fishing nets (which we still are in between). It’s now half eleven at night and I decided to finish my 20h day. I have to get up for my next watch at 6am tomorrow. [FYI – it took us another 4 or 5 hours to finally get out of the fishing net area]
BTW we didn’t use the engine to manoeuvre between the nets, we were even under Spinnaker at the beginning and the guys managed a number of amazing short notice gybes and then took the spinnaker down between the nets. [great evidence how far we have come in our sailing skills since we left Liverpool as real Ocean Sailing Amateurs just 6 months ago]
The days (or better nights) before, we had been surrounded by fishing fleets, some with nets, other squid fishing which apparently involves less putting out large nets, instead uses strong lights at night to attract the squid. Anyhow, to give you an impression on how navigation feels like during these times her a picture from our navigation software – we are the red triangle, the 100 green triangles are fishing boats which are moving around erratically: 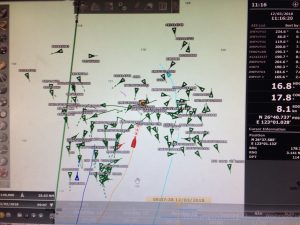 As not all the boats have an Automatic Identification System (AIS) on board, which creates the green triangles in our navigation software, we also have our radar on and this is what it looks like: 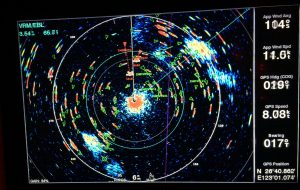 On deck this translated into hundreds of lights all around us.
We had some busy nights – also a reason why I didn’t write any notes these days.

Having seen this many fishing boats just in the small area we sailed through, makes me wonder how sustainable this approach is. In fact further north apparently there is hardly any fish left in the sea. We also feared for the few Dolphins we saw on the way. On that thought, I would also like to point out my little fundraising effort (see right hand column), for a charity – called ‘Blue’ – which brings a more sustainable fishing approach to coastal communities around the world. I believe, if we want to have fish on our plates in the future, there is no other way! As I’m more than half around the world now, but far away from my (ambitious?) fundraising target, I would appreciate your support! 🙂

Hello and good afternoon. We are currently heavily healed over in 35 knots wind, 3 reefs in the main sail and the other watch is now just getting the outer foresail (Yankee 3) down. And this after about 2 hours ago, we were in a thick fog with no wind at all for nearly all of the morning watch. So we went from Windseeker strait to Yankee 3.

In the background you can see Adrian at the helm with Ski-Goggles on.