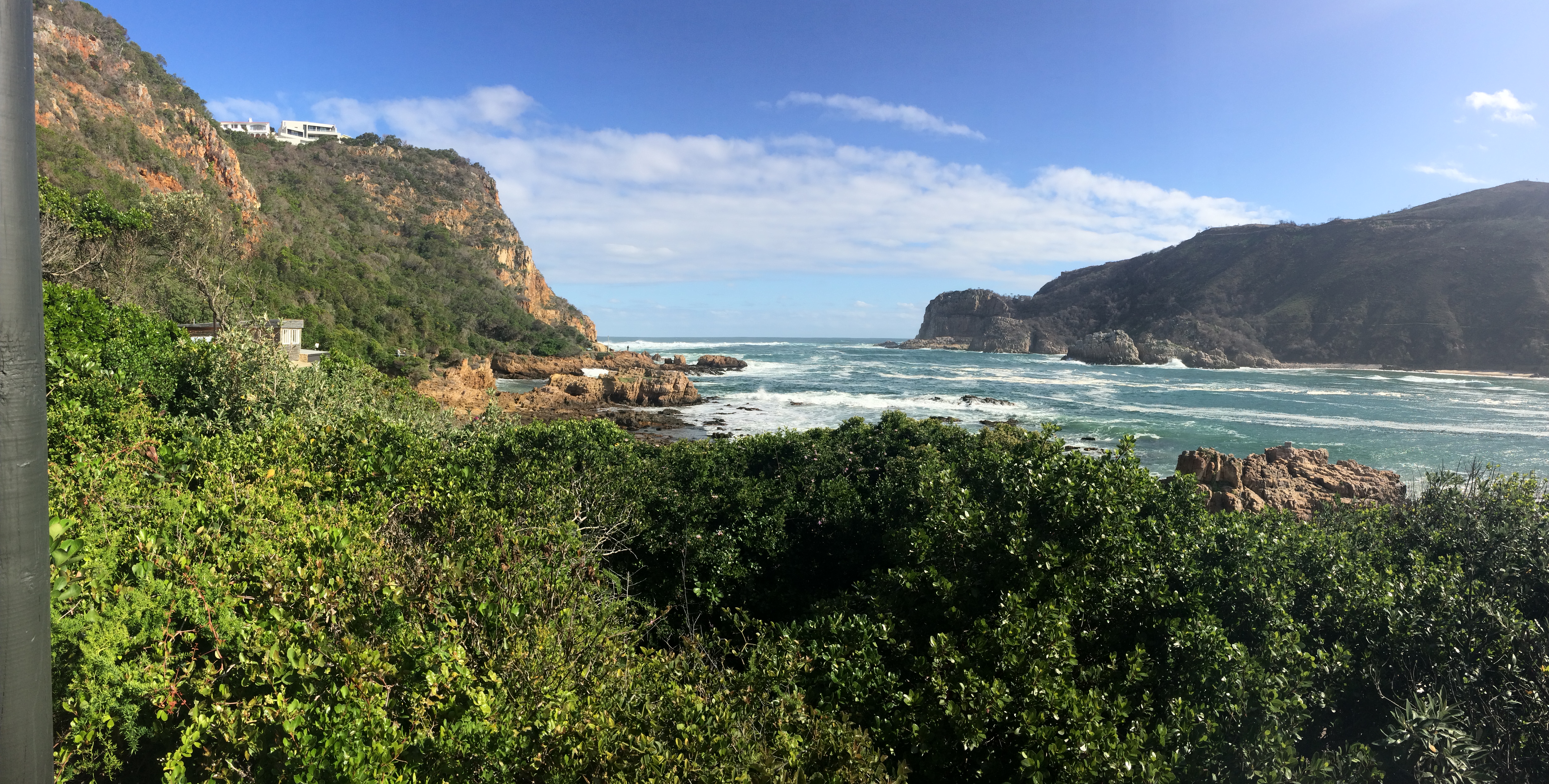 Thinking back to the last stopover, brings back a lot of beautiful little and big moments. Little thinks like the nice seafood platter lunch I shared with GG one day and night things like getting together with my family.

I can’t write about all of it, and will pick a few highlights – in summary: it’s a beautiful country with very friendly people and an amazing wildlife.

One thing I was able to organise from the boat, was a visit to a boat – or more specific, catamaran – manufacturer. Robertson & Caine (R&C) are one of the largest companies specialist in this globally and they are based in Cape Town, with a factory just 15 minutes away from the V&A waterfront where our boats were moored.

Early during our stopover, Alet and (some of) her team came over to visit our boat. It was great to have a bunch of knowledgable and interested people on board. They were also lucky, that morning Sir Robin was on our boat and free to chat. While some of our team were showing them around and explained the boat, the rest of the hotelplanner crew was going about their maintenance tasks.

On our return visit to their factory, were shown around all the different production ‘lines’, from the huge moulding forms to the fitting out of the boat. R&C produces motor- as well as sailing catamarans and it was interesting to learn about the difference in design.

Again, a big thank you to everyone at R&C, especially Alet. I’m looking forward to hopefully get aboard one of the leopard catamarans in the not too distant future. Jon, our temporary crew addition from Greenings, told me they are great to sail in the Mediterranean.

One thing I was really looking forward to on the way to Cape Town, was seeing all my family. They had organised a family trip to South Africa around the time I was expected to be there. The organisation was a bit tricky, as it had to be done way in advance, at a time when i didn’t really know yet, if at all and when exactly we would be in Cape Town.

In the end they were not in CPT at the same time, but I flew to see them and spend a few days with them down the Garden Route between Port Elizabeth and Cape Town. I flew to Plettenberg Bay in a tiny plane and joined them in Knysna, a beautiful small sea town.

We stayed in the most amazing guest house, Kanonkop Guest House, with a spectacular view over Knysna Bay and the heads leading to the ocean. The owner Mark, his wife Adele and the manager Liesl, are super hosts and all the staff is extra friendly and helpful. The breakfast with this amazing view was a real treat. In addition Mark was around every morning, made one feel like a family member as shared some insights about Knysna, the region and the house itself. A fun fact as example – the entry to the bay between the heads is one of the most treacherous harbour approaches in the world and when we visited the heads we understood why. It is a small funnel between the heads and depending on the tide and winds it can have strong currents with adverse waves. Many submerged rocks apparently sunk many ships and also cost a few sailors lives.

So again a big thank you to Mark, I really enjoyed our morning chats and the insights you shared. I was an honor to be your guest.

To tell you a bit more about the house, it is very close (10 min drive) to the centre of Knysna, but situated on a hill with thick bush forest around it, so that you don’t see any other house or the road. It has a free view over all the bay, which is changing all the time and never seems to be the same – we had days when we couldn’t see the bay at all due to thick fog and other days a clear view out to the heads.

In Knysna itself you have some nice restaurants with great seafood and Liesl was super helpful in booking for us the best places (Liesl, also thank you for helping me organise me way back to CPT). Around Knysna we made some little trips to a winery, elephant sanctuary and did some hiking on Robbenberg Island from where we saw a nice display by some whales and a small colony of sea lions.

I had a great time and the time with the family was a welcome (and needed) distraction from the life aboard. Thanks to the Schellenberg Clan to make it all the way to South Africa!

When I talk about the great places I stayed in South Africa and the friendliness of my hosts, I have also to mention Oxford House in Cape Town, a small boutique hotel in Greenpoint, where I managed to book a great deal. The manager there was also very helpful – in finding a coin laundry, where I could wash my foulies (the waterproof sailing clothes) myself and help me on a number of other small things. I’m not sure if she made it down to the boats – but again a thank you to her from here, next time I come to CPT I’ll make sure to book directly with you – nice rooms, perfect location.

One of the small but important highlights were the different drivers I had in South Africa, which hopefully give a good representation of the atmosphere in the country. First there is Bennie, who picked my up from Plettenberg Bay Airport to bring me to Kanonkop House (~45 min to an hour journey). He grew up a bit further up the coast, but had lived in Knysna a long time now. He gave me some interesting insights about Knysna and explained to me that all the burned trees between Plettenberg and Knysna (and beyond) were due to large fire a few months earlier, which lasted only a couple of days, but destroyed a huge amount of forest and many houses. (Kanonkop had also been effected – Mark apparently used water from the pool to put some fires around the house out – but was renovated afterwards anyhow).

Bennie was a very cheerful and friendly person and made it a really enjoyable ride.

Then there is Fritz, who got me back to Cape Town from Hermanus (1.5h). Fritz has German ancestors, which made an easy connection. But let me get to the real interesting story here. To get you into the picture, when I got to the pick up point I was greeted by this big fellow, in his late 50’s  or 60’s (sorry if I guess wrong here Fritz), who was breathing heavily and didn’t seem very fit and more comfortable behind the wheel, than doing anything active. How surprised was I when I learned about his time as a  non-professional (in my view still very professional) deep sea diver. As he is one of very few people (in SA) with a licence to dive deeper than 100(!) meters, he was asked to join a project to help some biologists to explore a new discovered species of a deep sea fish off the coast of Africa. He was one of a crew of 12 divers, who worked on the project over a few (4?) years. Diving to those depths is an extreme ‘sport’ and very dive a to be planned meticulously. Giving the great depth the diver goes to he needs a special mixture of gas and to decompress takes a long time – i.e. a very slow ascent. Fritz explained that a single dive could take 12 or 14 hours and supper divers would bring them food and drinks, as well magazines during the boring ascent back to the surface. The danger of diving to these depths is probably well illustrated by the fact the this project cost 4 of the 12 divers their life. And remember that is ‘just’ a bit deeper than 100m – we don’t even think about that, when we walk that on a flat surface or even going up that ‘high’ is nothing anyone would mention and where I’m right now the ocean is few thousand meters deep – and this is probably the reason we know less about the deep sea than we know about the surface of the moon – it is even harder to get to (fascinating, I think). Fritz, thank you for the enjoyable and informative ride to Cape Town.

This has become a very long post, but with all the different impressions (of which I only mentioned a few) it felt like a long stop-over as well.

If you have not been, I can really recommend a trip to South Africa and make sure you ask me for more tips if you go….

All the best from the Southern Ocean.

P.S.: I send a “dreifach Kölle Alaaf, Southern Ocean Alaaf, Kölle Alaaf“ to my friends in der Heimat. Have a good start to the carnival season.

We are currently 5771 nautical miles away from the Alter Maat – look Southeast direction 158 degrees! 🙂