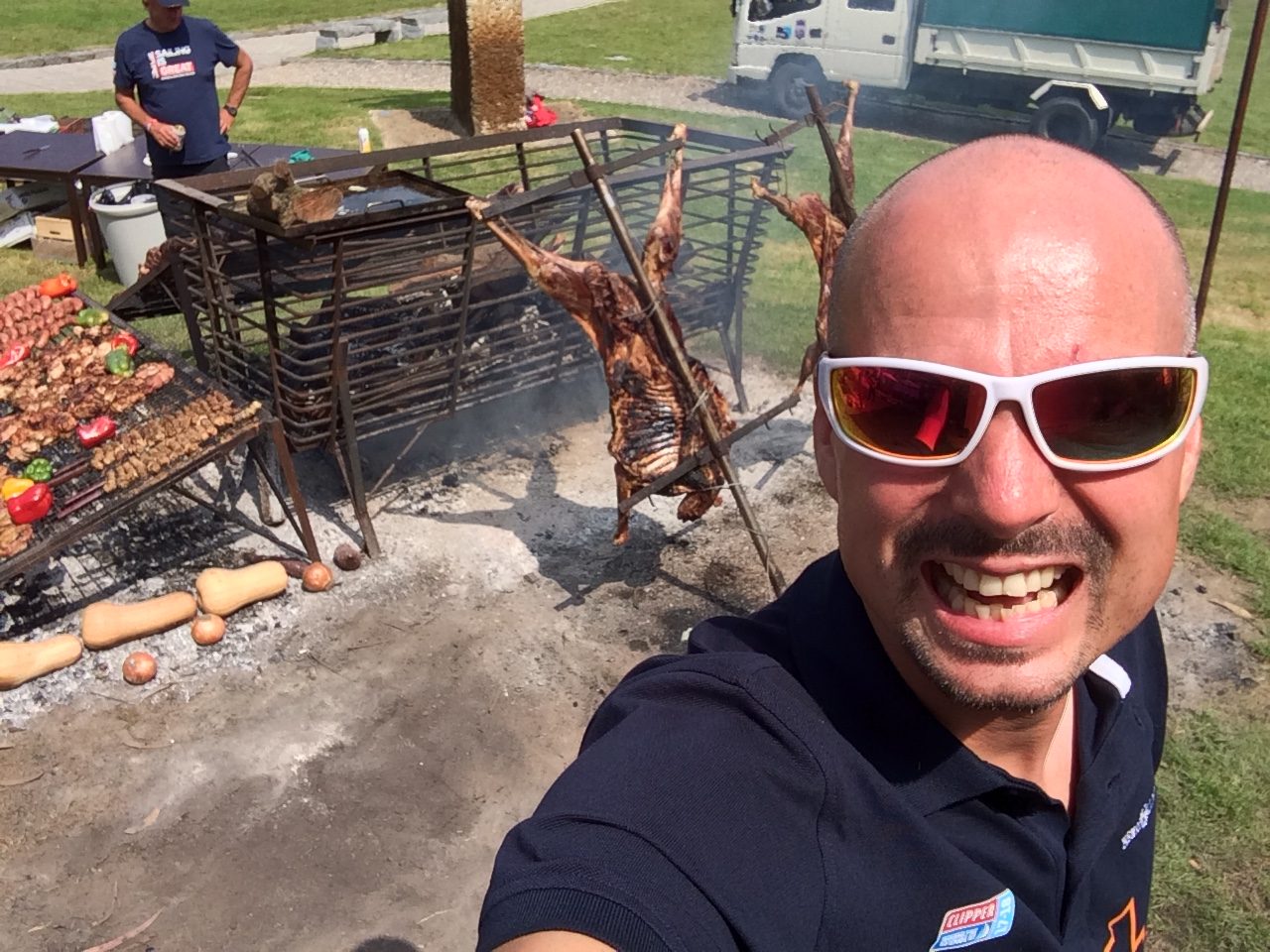 Food is maybe a bit to generic – it’s meat, fish and empenadas.

Ah – but I should not forget Dulce de Leche – the South American (probably originally Argentinian) desert made from caramelised condensed milk. It delicious, especially on crepe or with some ice cream…. :-p

In Uruguay, when you eat meat as a side you normally get … more meat. So the main dish is usually beef, with chorizo and maybe some lamb or sweetbread on the side – plus potentially some salad or potato salad.
The meat is of such great quality and so tasty, that you generally don’t need any sauce with it. And take it from me, the one who normally dips everything in ketchup or a bbq sauce (even tomatoes).

The first event the city of Punta Del Este set up for us was a restaurant and winery sampling night as a welcome. All you can eat and drink of really good food and drinks (from nice sparkling wine to whiskey). The food included bbq meat (a bbq in South America is called Asado and is really special and important), sushi, ceviche, empanadas, and different types of deserts including the famous argentine alfajores.

So that was a good start – but food-wise the really highlights were two asados we were invited to:
The first about 40 min outside Punta at an art museum with a beautiful outside garden area.

You can’t compare a Uruguayan asado with a bbq in Europe – it’s in a totally different league. To be honest – we are amateurs.

In Uruguay cooking meat over fire is an art and there is a famous chef having written even a book called “the 7 fires” to describe how different types of meat should/can be grilled. Usually in Uruguay (similarly to Argentina, but different to Brazil or Chile) there is a real wood fire on the side of the grill and then the hot coal falling down gets distributed by the chef(s) underneath the grill. The meat is arranged on the grill depending on the heat it requires at any given time. The wood fire and the smoke from it, give the meat additional flavour (which it doesn’t really need in all fairness, but it’s a welcome added aroma).

Most Uruguayans seem easily able to eat a kilo of meat from the asado (if you judge by what they provide and the size of servicing you can order in restaurants – no, 750g without the bone is not a portion for 2. I think very decent restaurant owner in Uruguay would be embarrassed to have a steak of 180g on the menu).

At an asado you often get a type of grilled or melted cheese (provoleta) and chorizo as a starter and later combinations of different meat as 2nd, 3rd and 4th course.

This was the case for both asados we went to.

The second one was at a golf resort/country club close to Punta. As it was evening and getting really cold, tables were prepared inside in a big room with an even bigger fireplace – the grill was obviously outside.

Pablo and Nelson were our two asado chefs.

Most Uruguayans, I was told, would eat their meat blue – ’just briefly show it the fire’. Unfortunately, Pablo and Nelson were apparently told to make it less South American and cook the meat a bit longer. However, in the end I also received some nice and juicy pieces

Should you make it to South America and want your meat nice red and juicy, but not rare or blue, order it ‘jugoso’)